The FIDE-rated 2011 Melbourne Chess Club Cup Weekender was held over 5 days from 28th October - 1st November. The tournament didn't attract as many players as previous years, but a number of 2000+ players participated, with GM-elect George Xie being the top seed. Rounds 1-7 of the tournament were held at the Club, on Leicester Street, Fitzroy, with the last two being held at the Fitzroy Town Hall. I stayed with Elizabeth Warren, who was a player in the tournament and a member of the organising committee.

My first game finished fairly quickly after my opponent neglected an important pawn push in the opening and allowed me to gain a lot of space and attack his king. My second round was quite nice; my opponent played an interesting sacrifice in the opening, giving up his knight for my two queenside pawns. Eventually I got my pieces into play and the advantage of having an extra piece became apparent. The game ended with a succession of sacrifices - which this time all happened to be the best move.

In my third game I was Black again, this time against FM Max Illingworth. It was a Sveshnikov in which I played a shaky line that I didn't know too well, and I never seem to get the compensation I was looking for after sacking my pawn on f5. He held an advantage for just about the whole game and won quite comfortably.

Round 4 I played the up-and-coming junior Savithri Narenthran, who had drawn with Mirko Rujevic in the first round. The game was a Grunfeld in which I got a decent attack on the kingside but didn't consider for very long a good attacking plan that I had, and instead chose a way to give back any advantage I had and let her get all her pieces into the game. At one stage I was quite worried about a move she could play that would probably leave me significantly worse off. Instead she chose a sacrifice that would have been perfectly sound had I taken it, but I moved another piece instead and created an unstoppable mate threat around her king.

N.B: The report on the first 4 rounds was written 1 year ago. The report on Rounds 5 - 9 has been written by Andrew a year later.

I was Black against Sylvester Urban in Round 5, a strong local player. The game was a (believe it or not) Sveshnikov that went into a sideline I didn't know well. At one stage I played a strange move which allowed him an opportunity to have an advantage but he chose a different move. A few moves later the game became complicated with me saccing a knight for three pawns and decent counterplay. The counterplay proved to be good enough to secure the point.

In Round 6 I played local IM James Morris as White. The game was a 7.Bb5+ Gruenfeld. I had a decent space advantage for most of the game and at one stage made an interesting decision to sac a pawn for play; soon after which I could have been a fair bit better had a played a normal move. It turned out that I had enough positional compensation to make good use of my pieces and keep his at bay. Before too long (partly as the result of time-trouble) his kingside defences broke down and, facing a significant loss of material, Black had to resign. This was my favourite game of the tournament, and can be seen below.


My Round 7 game can only be described as miserable. Playing top seed George Xie as Black we got into an opening that he had beaten me several times before from. I failed to find a decent plan after he played a line I had not prepared for, and my pieces (rather embarrassingly) became tied up in knots, which was when I had to admit a very early defeat.

Round 8 was against Justin Penrose. I was slightly better after the opening and we headed straight into a queenless ending, with R+R+N each. My pieces were much more active for most of the game, and I ended up winning an exchange. However I became confused about how to proceed while in time pressure and went for a line that should only have drawn - in fact, after another mistake it should have been winning for him. Following blunder after blunder for both side, my usual luck kicked in towards the end I was able to force a pawn promotion.

In the diagrammed position I played 40.Rxb6? after which the position became very drawish. Instead, 40.Rc5 Kd6 41.Kd4, and White is much better. 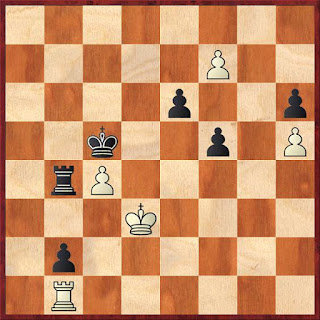 My position in the tournament was looking pretty good after Round 8, as I was on 6 points and pretty much guaranteed at least a bit of prize money. Playing White against FM Bobby Cheng, a win would get me outright 2nd and earn me $750, a draw would get me third place ($500). Disappointingly, I wasn't able to take either of these, as I was outplayed in a Stonewall where Bobby had a good space advantage on the kingside. He was able to infiltrate and I was not able to put up much resistance, and so he came outright 2nd with 7.5/9 - a commendable performance. George Xie took first place very convincingly with 8.5/9, and six people shared 3rd place (one of whom was me). Overall not a bad tournament for me - a certain improvement from my mediocre run in Europe. Though it was disappointing to fall away at the end.

Next year I would have the opportunity to play in this event again and improve on my performance. Would it be the case? Find out soon in my upcoming post: MCC Cup Weekender 2012!