I experienced a swift (21 moves) defeat last week, and thought it might be instructive for others to see some good examples of what Nunn says above, from my own games in the last few years - pretty much games where I've been lost right after the opening.

Candidates - at the halfway mark

"The cherished dream of every chessplayer is to play a match with the World Champion. But here is the paradox: the closer you come to the realisation of this goal, the less you think about it"
- Mikhail Tal
by Junta

As we predicted prior to the tournament, the contest for the Challenger's seat seems to be between Carlsen and Aronian, but...outdistancing the other players like this?! Like the Tal Memorial in recent years, in a tournament like this where there are no 'bunnies', I expected Carlsen and Aronian to have a sure but slight edge over the others, but these two are simply playing at a higher level over the field, possessing the strength to produce multiple wins. It will be awesome to see one of these guys play for the title with Anand in November.

I'm very happy Aronian has been able to keep pace with Carlsen, but it will be tough to continue doing so for the second half - Carlsen's nerves and stamina are phenomenal, and he finishes events strongly - assuming Carlsen can keep playing at a level he is satisfied with until the end, a score of 9.5 or 10 points seems pretty plausible.

If there is a winner in tonight's Carlsen-Aronian game, obviously they will have a big edge to win the event, while Rounds 9, 11 and 13 where Carlsen and Aronian are both Black, appear to be the best chances for the others to beat the duo and shorten the gap.
Posted by figjam at 01:17 No comments:

"Gentlemen, you had my curiosity. But now you have my attention"
- Calvin Candie in the film Django Unchained
by Junta

We here at FIGJAM are quite fond of the Ukrainian star, but not making the time control in successive rounds (Rounds 2 and 3 of the Candidates) is extremely worrying. Although it's well known that nerves have tended to get the better of him in World Championship events, we can only hope he can pick himself up from here.

Although Ivanchuk has been one of the world's best players since the early 90's, I only began to appreciate how talented he is when I started following elite tournaments a few years ago. One of his games from the 2010 Olympiad made a big impression on me, and it's definitely one of my favourite games. On chessgames.com the game was later named 'Final Fantasy'.

Rounds 2-3 saw a high rate of decisive games (2/4 and 3/4, respectively), and the games in the first leg of the event have been very interesting. Things will get even more exciting from here.

Email ThisBlogThis!Share to TwitterShare to FacebookShare to Pinterest
Labels: Predictions

Playing on three boards in one round

I pass into a medium-sized room accommodating an array of long tables, each with two boards spaced equally along the length of it. The lighting in the room is quite good, and there is a relaxing contrast of colours between the simple light grey tables and the royal blue carpet. I walk over to sit down at one of the boards where an Indian player in his 20's is seated, gazing over the board as Black - he has just played his move, and now it's my turn as White. 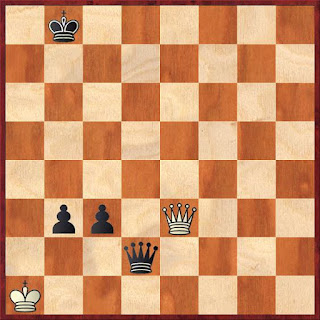 It had been a hard-fought game, and I was determined to force a draw in this position with perpetual check - I began analysing both 1.Qb6+ and 1.Qe8+, as they both seemed decent.

After 1.Qb6+ I calculated that my queen keeps checking along the 6th rank until the black king reaches h8, when h6 is unavailable because of the queen on d2, but I'll have alternative checks then. Seems alright, I thought, and I proceeded to check how 1.Qe8+ might turn out. I keep checking along the e-file, restricting the king on the queenside - this also looks like it might achieve a draw.

It was difficult to decide between the two moves, and I only had about two and a half minutes left on the clock, with increment - I was leaning more towards 1.Qe8+, but in the next moment I was sitting on the chair adjacent to the one I was just on - I was Black against an Australian IM on the other board on the same table.

This time I was in a complex middlegame, each having queen, both rooks and minor pieces - and although I had an ambitious trio of knight, rook and passed pawn in White's camp, White had an extra piece and the position seemed unclear.

As I began calculating some lines (again, only having 2-3 minutes on the clock), I had a flashback of what I was doing before walking over and sitting down at the board with the queen endgame. In the adjacent room (or rather the invisible other half of the room, which was divided by a wall running two thirds of the room's width), yes...I had been playing another game in the same round. I was White, and had glanced over at the clock, which showed I had the 1:30 hours to begin with, while my opponent's time was down to a minute and a half - he hadn't arrived yet.

So, it seemed one win was guaranteed (though I had a miniscule suspicion that the third mystery opponent was coming late on purpose, arriving with seconds on the clock to throw me off), in another game I was fighting for a draw, and for the third it was an unclear position but I somehow didn't feel so confident in winning.

N.B. This was a dream I had two nights ago. The first game with the queen endgame is interesting in that I could not comprehend that Qb6+-Qc6+-Qd6+ wouldn't be possible on account of 3...Qxd6, and in fact White's quickest path to a draw is with 1.Qb6+ Kc8 2.Qxb3, which I did not even consider - or maybe its just that the position isn't clearly defined inside the dream. The stress of one game is big enough in a classical tournament, so dealing with simultaneous games felt pretty intense.
Posted by figjam at 22:45 No comments:

2013 sees the return of the double round robin format to the Candidates tournament, and I can't wait to see the eight elite players battle it out over 14 rounds.

From March 15th~April 1st, chess fans all over the world will be following this event in London which will decide the next Challenger to the current World Champion, Anand, in this world championship cycle.

Carlsen is the obvious favourite, while Aronian and Kramnik are, as usual, expected to do well - but it would be exciting if one or more of the other five players surprised everyone. I'm hoping to see some good games by Grischuk and Ivanchuk.

If you don't know much about the Candidates' characters and views, these extensive 'KC-Conference' interviews with some of them are well worth a read.
Levon Aronian
Alexander Grischuk
Peter Svidler

While here are some interesting interviews with the other five:
Magnus Carlsen on an online show, Metaphysical Milkshake
Vladimir Kramnik: "Art, Chess, Beauty and Depth"
Teimour Radjabov: "I simply fought the way I always do!"
Vassily Ivanchuk: "I can still become World Champion"
Boris Gelfand: highlights from interviews he gave after winning the Candidates last year
Posted by figjam at 01:12 No comments:

by Junta
Looking at some lines of the Sicilian Kan (1.e4 c5 2.Nf3 e6 3.d4 cxd4 4.Nxd4 a6) tonight, I remembered one episode from the World U/16 Olympiad in Singapore, 2007. I was examining the above position with teammate Moulthun and Ian Rogers present.

As many players should be able to relate, it can be fun to consider unintuitive, unnecessary or unusual moves (within the boundary of not being completely pointless) when analysing positions, and for Black's 6th move here I found 6...Qb6 - White must give a piece back, and Black can reach a Hedgehog pawn structure! 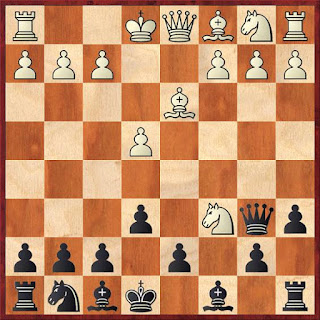 Objectively it is of course a waste of time, and after 7.Ne5 Qa5+ 8.Nd2 Qxe5 9.O-O for example, White is much better. Still, Moulthun and I were amused at discovering such a 'novelty', but showing it to Ian, he quickly pointed out that White can stay material up with a surprising move: 7.Bxa6!? 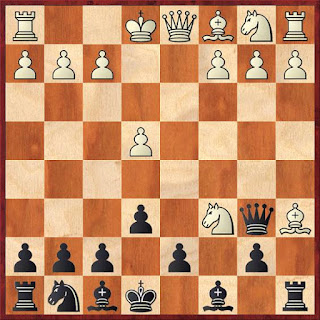 We had completely missed this intermezzo, and White stays a pawn to the good (although Black has some compensation in the two bishops). The novelty had been refuted...

Email ThisBlogThis!Share to TwitterShare to FacebookShare to Pinterest
Labels: Openings

To mark the start of the third month of this year, here's my all-time favourite mate-in-3 problem, composed by the famous Sam Loyd. 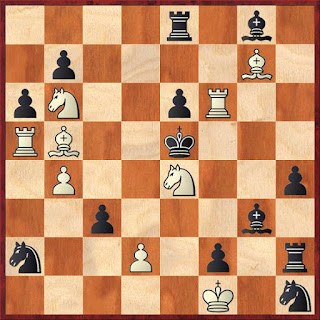 If you haven't seen it before, try solving it before peeking at the solution (in white) below.