The most geometrically awesome chess problem

"All conceptions in the game of chess have a geometrical basis."


by Junta
At the end of a lecture I gave at the universities' training camp in Niigata earlier this month, I showed a problem I first saw a few years ago.


Composed by Unto Heitonen
Published in Die Schwalbe, 2000
This is not a regular chess problem, but one in the realms of fairy chess, i.e. unorthodox problems not involving direct mates. The variant used here is the 'double maximummer', where White and Black must each play the geometrically longest move possible on the board on every turn.

We will consider each square to have dimensions of 1x1 units, and the distance between one square and the square horizontally or vertically adjacent to it 1 unit. The distance to a diagonally adjacent square would be √2, or approximately 1.4 units.

The list of relevant distances is below, rounded to one decimal place.


So the first move for White would be 1.Bf1-d3, longer at 2.8 units than a knight move (2.2) or a rook move of two squares (2). Black moves after White like in normal chess, and after some time (it won't be a walk in the park!) the game will end in a certain way. Progress is slow at the start.

Note: If one side is checked, they must escape the check with, of course, the longest move possible.

I have no idea how composers create pieces of work like these, but please try this out over the board, not on the computer screen - be careful not to overlook making a mistake, or you'll have to start all over again. Enjoy!
Posted by figjam at 17:46 No comments:

A day before the Japan League tournament (August 10-13), I played some training games with good friend and Japan's top active player Shinya Kojima at his home and nearby beach.


White let Black equalise too quickly with Black's development advantage outweighing White's bishop pair, but active play with ...e5 or ...f5 was delayed for too long, and White was able to get an attack going on the kingside. Even after 20.g5, objectively Black is still fine, but letting White capture on h6 was too much.
Posted by figjam at 23:57 No comments:

A tactic from my Round 2 game in the Swiss, 7-round FIDE rated Japan League tournament in Tokyo: it is Black to play and win. 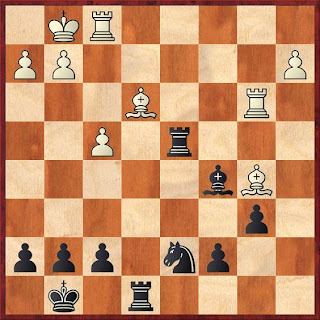 2 weeks of chess in Japan

"Chess is as elaborate a waste of human intelligence as you can find outside an advertising agency."
- Raymond Chandler

Through August-September I'm in my summer holidays here in Japan, and my last two weeks were filled with chess.

Over the two weeks I played 7 classical games, 17 rapid games, and easily over 100 blitz games over the board - I feel it's time for a bit of a rest from playing! I'll be posting game snippets and pictures in the days to come.

The second most important (after the World Championship match in November) and perhaps most exciting chess event of the year is the Chess World Cup currently going on in Norway - tonight the second game of the 4th round is being played, and every round has been very interesting to follow, with intriguing games and high drama.

On the official website above, you could enter your predictions for all 64 matches - there were 809 entries submitted before the commencement of Round 1, and after 3 rounds I'm sitting on =61st-84th with 69.8% of match winners correctly predicted. A Morozevich-Nakamura final seems extremely unlikely, but who knows...

Edit: Yes, Nakamura has been knocked out by Korobov.
Posted by figjam at 01:03 No comments:

This puzzle comes from IM Andras Toth's book Exploration in Chess Beauty, and is one of my favourites.

﻿
The solution can be seen by highlighting the area below.


The king makes the seemingly pointless walk from d8 to h4 all so that that the queen can lure the bishop onto a different diagonal, the point of which only becomes relevant when it makes it to b6: it blocks the queen from being able to defend the rook and prevent mate.
A lovely piece of work that demonstrates with real elegance how what seem like the finest, most intricate details of a position can make such an important difference.

Reminiscent of a certain mate in 271 I saw once...

Back rank mates are a motif we learn from our days as a beginner - a crisp way to end the game. Earlier this year I was going through some articles on the ChessCafe archives and came across an elegant study that's all about the back rank(s). 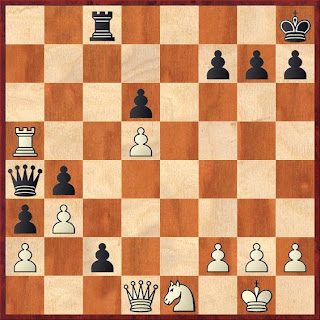 For two dozen other great examples (some quite famous) of back rank tactics, here's the link to the original article: http://www.chesscafe.com/text/dvoretsky31.pdf Enjoy!
Posted by figjam at 20:13 No comments: