The European Team Championships was held in Greece from November 3rd-11th, at Halkidiki which hosted the World Youth U/12's back in 2003, my first overseas event.

The Open section had 38 teams, of which the top four teams had an average rating above 2700, 20 teams were above 2600, and 28 teams were above 2500 - a very strong event. If Australia could have sent in a team with the highest rated lineup possible (average 2480), we would have been seeded 33rd.

I was sure that the battle for gold would be between the highest seeded teams:
#1 Russia (average 2758, determined to win their first team gold in years),
#2 Ukraine (2010 Olympiad winners),
#3 Azerbaijan (2009 European Teams winners) and
#4 Armenia (always formidable in teams events, winning the '06 and '08 Olympiads, and this year's World Teams).

However, with so many strong GMs playing, there were many big upsets and surprises throughout the 9 rounds, and the race to the finish was unusually dramatic, with the leaders changing round by round. Last night, I was up until 3:30am watching the live games, as the allocation of the medals hung on the result of the nervy last game...

From the start of the tournament, though. After the first four rounds, things had already took an unexpected turn, with Azerbaijan, France (6th seeds), Bulgaria (7), Germany (10) and Spain (13) leading on 7 match points after 3 wins and 1 draw each - while Russia, Ukraine and Armenia had only scored +2 =1 -1 (losses to Bulgaria, Germany and Azerbaijan, respectively).

And after Round 5: Bulgaria were sole leaders on 9MP, with Azerbaijan, France, Romania (17) and Greece (19) following on 8MP. Though around the middle of the field in seeding, even these latter two teams had an all-GM team, capable of fighting against any of the stronger teams on a good day.

Round 6 was hard fought at the top, with a single win deciding the winner on Tables 2-4. Bulgaria drew with France at the top, so the standings were now
10MP - Azerbaijan, Bulgaria and Romania, and
9MP - Armenia, France and Germany.

By now, the prospects looked grim for Russia and Ukraine, behind on 7 and 6 (!) MP respectively. Although Russia recovered to score =3rd, Ukraine had a shocker, finishing with 4 wins, 2 draws and 3 losses (including one to Switzerland [26]!) at 15th.

Here are some crisp game climaxes from the first two thirds of the event: 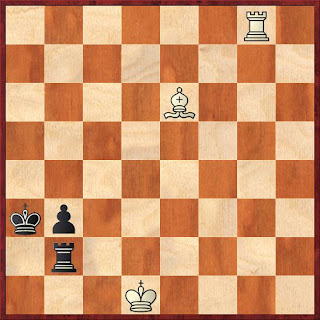 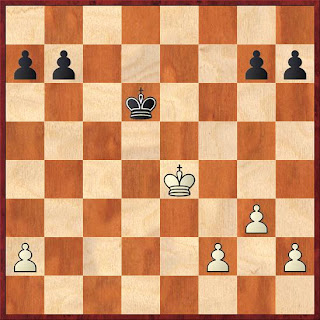 "In order to complete the rout Alexander Grischuk used a cunning trick: when his opponent had managed to defend a difficult position Grischuk looked from side to side to where his opponents had won, sighed and offered a draw. The pawn ending really was drawn, but could the proud Czech guy agree to that so easily? Of course not, and having used up all his remaining time thinking Viktor boldly advanced one of his pawns. When time trouble ended you could observe the scene, as Laznicka, who was sitting up straight on his chair, found out that he was lost. He slowly started to slide from his chair and found that his feet were far ahead of the table in the aisle, while his head was almost under the table. A painful loss, but a deserved victory for the Russian team." 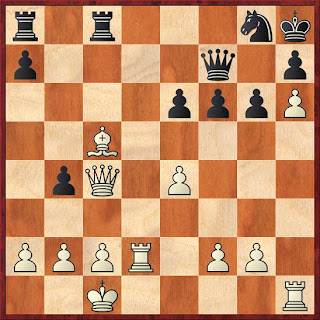 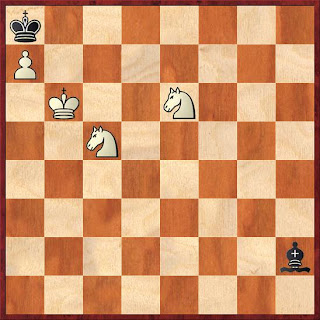 
A memorable swindle.
Posted by figjam at 16:22