"No. They come to be woken up. The dream has become their reality.
Who are you to say otherwise?"
Elderly man

"Hey, Justin Bieber! This is for you!"
A young Malaysian man as he tries to hand a flyer to IM James Morris in a shopping mall 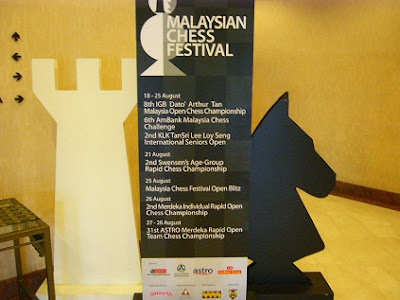 There is only one more round to be played in the Malaysian Open after three double-round days, two single-round days and two rest days - it feels especially quick for us after the World Juniors went for two weeks.

After Round 8, Chinese GM Li Shilong has kept his lead with an impressive 7/8, followed by compatriot GM Wang Rui on 6.5/8, with three Chinese players and one Vietnamese player a further half point behind - a Chinese 1-2-3 finish is very likely. Final Round 9 pairings are here.

Leading Aussies are James Morris, Gary Lane and Junta on 5 points. James has performed especially well - after starting with a win in Round 1, he has scored +2 -1 =4 against average 2481-rated opposition for a rating performance of 2491!

A milestone game for Fedja came about in Round 7 when he managed to scrape to a draw in Round 7 against Filipino GM Darwin Laylo (2531) - his first ever half point from a GM!

For the rest day today, we went sightseeing around the KL city with the Japanese contingent.
﻿