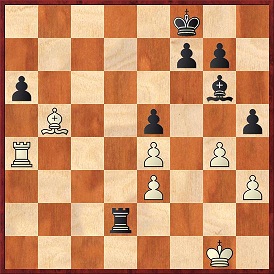 Black has replied to 37.a5-a6 with bxa6. With what piece should White recapture?
a) the bishop
b) the rook (solution below can be read by highlighting all text)
Of course, with the bishop, so e4 stays defended. However, epic fail-level blunders occur once or twice a year, and this may be the worst in an equal endgame I have ever committed - I played 38.Rxa6, immediately realised my mistake (my opponent froze for 10 seconds also, unable to believe his eyes), and resigned after 38...hxg4 39.hxg4 Bxe4 40.Kf1 Bf3 41.g5 Rg2 42.g6 Rxg6.

Round 2: In the 7-day schedule, there were only 15 players (merged with the 80-player 5-day schedule from Round 5) in a strong field, where I was one of the lowest rated - there were no easy games. My double fianchetto hedgehog as White against a FM eventually worked up a kingside attack, and I got to 50%.


Round 3: The posting of pairings was always very late, maybe 15-20 minutes before the game, not giving much time for prep. After success in the opening (surprising my opponent with 1.Nf3 Nf6 2.c4 e6 3.g3 a6, which seems to score respectably), I made the mistake of castling queenside, instead of safely on the kingside, and my whole position came under fire quickly.

Round 4: Against a veteran GM. Black seemed comfortable after the opening, but I somehow gained the advantage through normal moves, getting to 50% again.

Round 6: Although I was happy with the opening against Puchen Wang, after 13.e4 and 14.exf5 which we agreed looked suspicious, Black had the initiative and scored a quick win (27...dxe1=Q 0-1).

Round 8: A tense game where my time management was very poor. However, I was cheered up after the game (in fact, at that time I just saw the main lines, but really got down to analysis only today while writing up) discovering some beautiful lines. My intuition told me 24...Qf6 was the right move, but I did not even see the follow-up 25...Ra5! If I had been able to follow one of these computer lines during the game (though someone with a more powerful engine might be able to disprove Black's superiority), it would have definitely been the best game of my life. Hours and hours of working on your chess will be more than compensated for when you achieve something like that in a game...

Round 9: A lucky swindle win from a worse position took me to 5/9 - a very average tournament, losing to four higher rated players. Moulthun was not in good form, and finished on 4.5/9 - with his Round 9 game, which he described as his worst ever, his scoring % against female opposition dropped even lower...

I ended chess in the US on a very positive note, placing 3rd in the Blitz after the main tournament (starting after 11:30pm) where I was 17th seed. My performance rating may have approached super GM level...:) I think many players can relate to the experience of simply having fun and playing freely, and in the process playing some of the best chess of their life - this was what happened for me in this event. My mini-match results for the 10 rounds are below:

From the start of the tournament, watching the top seeds (and joint winners on 7/9 at the end) Kamsky and Adams play was a valuable experience. Seeing in person these giants who I have grown up reading about in magazines, books and websites, and especially seeing many games of, their focus, calm and sheer presence at the board made a big impression on me.
Posted by figjam at 03:27